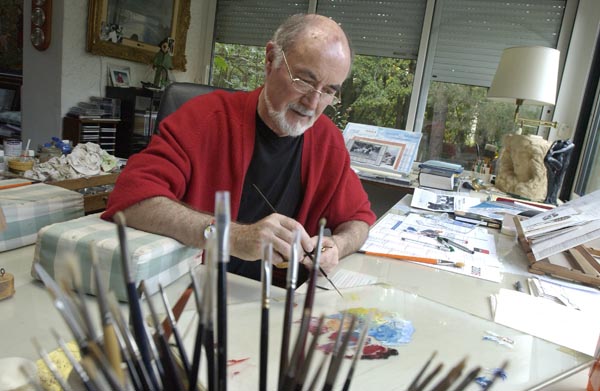 Raphael Toussaint, a French painter, was born in La Roche-sur-Yon on April 25, 1937.  He began his life studying to be a classical singer.  When he became of age in 1957, he was drafted into the military and became seriously injured.  This injury made it impossible for him to continue his studies in classical voice, and he took up the paint brush and began to paint.  He turned out to be a natural and soon began to participate in art exhibits all throughout France.  Critics have hailed his work to be steeped in spirituality with a strong influence from Flemish and Italian painters.  Toussaint feels most comfortable painting natural sites of rolling hills in the Vendee countryside, a region of which he is a native.  Through his wonderful landscape paintings, he is able to incorporate the heritage of the French people.  Each painting is a celebration of French heritage and the joys and beauty of the simple life.