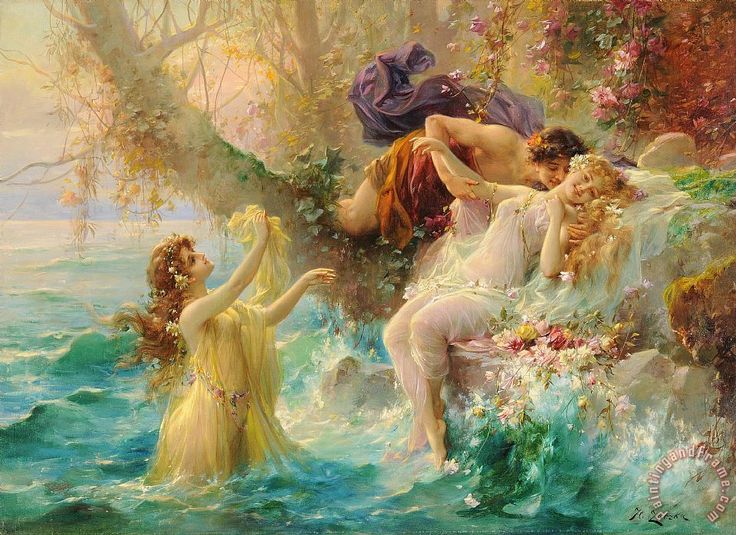 We are pleased to introduce to you Hans Zatzka, (also known as P. Rosnard), an Austrian painter who reached spectacular heights of notoriety and fame during his lifetime and after.  He was born on March 8, 1859 in Vienna to his father who was a construction worker and his mother who was an actress.  At a young age, Hans revealed an interest in painting, and as a student of the Academies des Beaux-Arts, he was mentored by several distinguished Austrian painters, such as Christian Griepenkerl, Karl Wurzinger, and Karl von Blaas.  Hans furthered his studies by visiting Italy where he was extremely influenced by the decorator and academic history painter Hans Makart, and like him, he would adopt the life of a free-lance painter and create portraits and murals for both houses and churches.  In his mid-twenties, he was commissioned to paint the ceiling fresco at Kurhaus Baden, an elegant spa resort and casino.

Hans married, had two daughters, and was completely absorbed in his work.  His family and friends, who rarely caught a glimpse of him, only saw him at the dinner table, and then it was right back to work.   Hans was not interested in teaching students, privately or collectively within academies or art schools and refused to accept any positions.  By the late 19th and early 20th century, he was content with the work he did for churches, and the little money he was generating from the sale of his paintings-turned-postcards, which became largely popular at that time in Vienna and were circulated widely and to this day are considered to be collectables. Hans continued to work until the age of eighty, and died on December 17, 1945.

Hans Zatzka is, and always will be, the artist and painter of glorious works depicting mythology, religion and fantastical landscapes bursting with every shade and color under the rainbow that speaks volumes.  One has simply to gaze at the breadth of concentration and beauty portrayed in his paintings with a wide variety of color used throughout each artwork.  Each piece is truly a magnificent masterpiece!